Why He Didn’t Call You Back – Book Review

Why He Didn’t Call You Back

Author Rachel Greenwald’s Why He Didn’t Call You Back is a comprehensive, in-depth look at why men don’t call women back after a first date. By developing an extensive exit interview strategy, Greenwald interviewed a thousand “hims” and was able to get them to explain the real reasons they never called back after a first date. The answers she got were clear and consistent. She is very logical in her approach and does a great job explaining how she was able to get these men to be specific as to why. While written for women, her process makes this book easy for men to understand.

She explains that much of this choice has to do with online dating. Online dating has led to a high percentage of first-date failures, too many options, overly high expectations, screening out rather than screening in, easier rejection, and more focus on messaging instead of phone calls and meeting in person.

One of the biggest surprises in this book was that women guessed wrongly 90% of the time on why the men didn’t call them back—the actual reasons are categorized into this book’s Top Ten Date Breakers. Greenwald adds an additional six honorable mentions for a total of 16.  She breaks down how women can recognize if they are displaying these behaviors and what they can do to make corrections. Many women have a combination of these behaviors. However, in most cases, all that is necessary is a set of minor adjustments. The key here is not to change who you are, but rather to create context as to who you are, presenting who you are in a tempered and deliberate way.

While this book is written for women, men can learn much from it, especially if they have difficulty getting second dates. In many cases, men are a mirror image of the 16 types listed. I found myself laughing with Greenwald all the way through this read. I’ve had many personal experiences with these date breakers.

It’s essential to recognize that this book encourages awareness of your weaknesses alongside some minor corrections and that this small change will make a big difference in your success at getting to second and third dates.

While this book was published back in 2009, 95% of the information is still relevant. I’ve taken the liberty of listing Greenwald’s Date Breakers (and other related content) below with a small description for each one. We’ll all recognize parts of ourselves and our dates, but you’ll need to purchase the book to get the in-depth scoop on how to identify, troubleshoot, and correct your questionable dating behaviors. I highly recommend this book to anyone who wants to date with purpose to find a really great guy or gal.

BEYOND THE TOP TEN

TOP FIVE DATE-BREAKERS THE MORNING AFTER A GREAT FIRST DATE

REASONS HE DOES CALL HER BACK 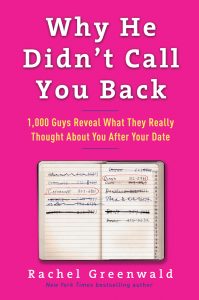 Book Title: Why He Didn’t Call You Back