Why Are You Still Single?: An Average Joe’s Take On What’s Really Going On In The Dating Pool – Book Review

Why Are You Still Single?: An Average Joe’s Take On What’s Really Going On In The Dating Pool And What You Can Do To Stay Afloat

Why Are You Still Single is about Vince’s “Average Joe” experiences with online dating and relationships. But as you’ll quickly find out, Vince has a lot more depth than the Average Joe. Using his Gen X life experience as a compass, he reflects upon what he has learned over the last seven years—from his middle forties to his early fifties—from dating and relationships.

Frustrated with the vast majority of his online dating experiences, Vince analyzes and categorizes the specific reasons for these frustrations. Through some trial and error and personal growth, he establishes a workable set of dating guidelines that help to minimize frustration significantly. It’s a calibrated approach to setting yourself up for online dating success, becoming a better dater, and finding those seeking the same relationship goals as 50 Daters.

It was easy to identify with Vince, as he had recently turned fifty. Several of his observations hit close to home. This started with the section on the Hard Sell. Here, Vince explains how individuals with complex personalities have a disadvantage in the dating world. If our fellow daters can’t package us up neatly in a box, we become too much work, which leads to being quickly dismissed in favor of the simplistic and familiar. Shortcuts are the norm for most daters.

Vince is an IT guy by profession. I’m an engineer. When it comes to dating, both occupations are immediately stereotyped as the nerdy, geeky, and introverted personality type. When you don’t fit the stereotype, people don’t know what to make of you. Personally speaking, several women I’ve dated have called me an enigma. They don’t know what to do with a guy who’s an engineer, entrepreneur, musician, and writer/blogger, who takes singing/dance lessons, and who does what he says.

When he got back into dating in his early 40’s, he explains that it took him a couple of years to realize that he was not ready and should not be in the dating pool. Ditto here. At some point, we are all part of the problem as we learn and grow.

Vince does an excellent job of identifying where most singles end up wasting their time with online dating: endless texts, emails, phone calls that don’t happen, ghosting, meetups canceled at the last second, and bad dates. He identifies the root cause that draws you into this cycle and describes what he did to overcome what he calls “The Tinder Time Wasters.”

His take is focused and accurate on the dating confusion generated today from men (nice guys) deferring traditional dating roles and letting women take the lead. He expands on how this reversal of the natural male/female dynamic takes its toll on a romantic relationship.

The damage the hangout culture has created is also thoroughly addressed. Here, regular dates have morphed into open-ended hangout situations. A man no longer has to take the lead, just show up to the woman’s home or apartment and leave the door open to opportunities for sex. Vince is surprised at the willingness of women to begrudgingly accept this, thinking that the hangout will eventually lead to a real date. Of course, it never does, and the man can get what he wants without putting any effort into it.

One of the best parts of the book examines how we can adapt, stay positive, and set ourselves up for dating success by owning our previous lousy dating and relationship decisions, creating and sticking to our “Must-Haves” and “Deal-Breakers” lists, dealing with rejection, and putting in place a functional dating process that allows us to trust and connect with others in a meaningful way.

There are many not-so-obvious small obstacles that get in the way of having a positive dating and relationship experience. Many of those little things are brought up in the book. Just by having a better understanding of some of them, we can adjust our attitudes. For many of us, those minor adjustments can have life-changing results.

Here is a sampling of other subjects discussed that are worth going over: 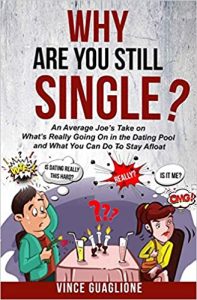 Book Title:  Why Are You Still Single?: An Average Joe’s Take on What’s Really Going On in the Dating Pool and What You Can Do to Stay Afloat