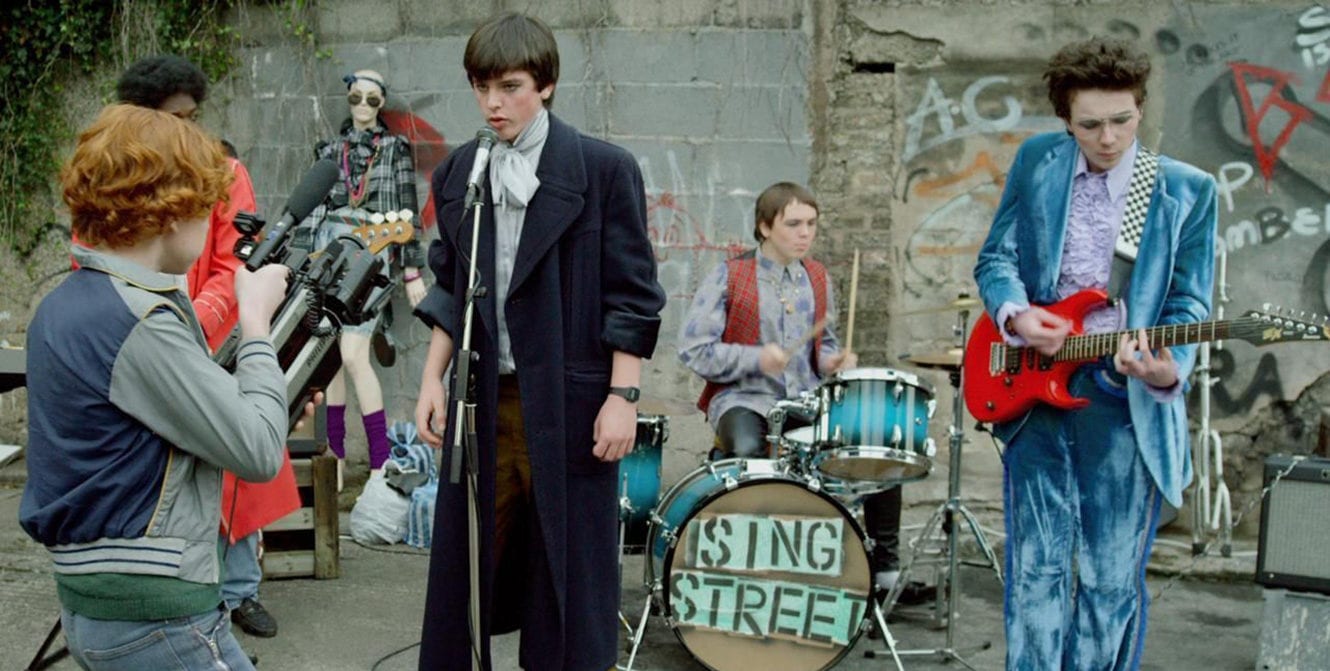 This movie takes place in Dublin, Ireland in 1985. It follows Conor, a teenager getting transferred to a public school who has to deal with the grim realities of being the new kid. He gets picked on heavily by the students and staff. To impress a girl named Raphina, he tells her he is making a music video and he wants to know if she would like to be in it. She shows interest, so he has to quickly form a band and rehearse some songs… if he can even learn how to sing.

Influenced by the likes of Duran Duran, Hall & Oates, Spandau Ballet, The Cure, and Joe Jackson, Conor gives himself a makeover, which does not go over well. Conor’s older brother Brendan supports him and helps him to better understand bands of that era. Their own band improves, and chemistry builds between Conor and Raphina as they make videos. Raphina realizes the songs Conor is writing are about her. Conor learns he must compete with older guys for Raphina.

This is an excellent movie about being the underdog on many fronts. The soundtrack is great and will bring you back to the 80s. The originals the band plays are pretty catchy, too, and the story will bring a smile to your face.

This movie is about risks. Conor took a risk in talking with Raphina, in starting the band and making the videos, in wearing makeup. The ending is even high-risk. The movie’s also about going full throttle at something you are passionate about. There are several truthful scenes in this movie as Conor learns how to conduct himself around women. (I will admit that I wore makeup in some of the hair bands I was in back then, so I identify with Conor attempting to wear makeup to school.)

Conor learns that women are emotion driven. Most guys, especially “nice guys,” don’t understand this. They tend to view these interactions from a purely logical standpoint. Furthermore, most men don’t understand the difference between dating a woman and being her boyfriend. (Guys…dating a woman does not make her your girlfriend.) It’s about taking a risk and putting yourself out there. When you show up for a date, put your full effort into the interaction; don’t just go through the motions.

In the movie, Brendan explains to Conor how relationships can start for the wrong reasons. This was true in our youth for one set of reasons and is true today for a completely different set. Since we’re in the third and fourth quarters of our lives, it’s better to spend it with someone we really want to be with rather than one who’s just convenient to be with.