No More Mr. Nice Guy by Dr. Robert A. Glover

No More Mr. Nice Guy is about the perils of becoming the Nice Guy.  As Dr. Glover states, “Nice Guys believe that if they are good, giving, and caring, they will in return be happy, loved, and fulfilled.”  This is also known as Nice Guy Syndrome. In his practice as a psychotherapist, Dr. Glover encountered countless resentful and frustrated Nice Guys.

It’s important to note that the term “Nice Guy” does not refer to someone with actual nice behavior but rather to someone with the belief system of the Nice Guy.  Many Nice Guys harbor negative traits that can make them anything but nice.  Some of these Nice Guy traits include being manipulative, being passive-aggressive, being controlling, giving to get, having deep masked rage, and having problems with intimacy and sexual relationships.  Nice Guys tend to go from one extreme to the other.  They are also looking for something to fix, especially when it comes to women.  Nice guys will fall over themselves to please the women they are dating. The women will become their projects, and the Nice Guys will drop everything for those women’s attention. This is known as “caretaking.”

Nice Guy behaviors are well defined in the book, which also offers some great explanations on how Nice Guys become who they are. In his practice, Dr. Glover eventually held therapy groups to help men kick the Nice Guy Syndrome.  There are many example stories from over 1800 hours of working with Nice Guys.  The book contains a series of forty-six “Breaking Free” activities, and the stories follow the real-life results of these Breaking Free activities.  We see how Dr. Glover changed men from victims full of Nice Guy bitterness to legitimate, cohesive people.

I was thoroughly captivated with this book. Through it, I identified many Nice Guy behaviors I had and eventually shed when I was young.  Some of the girls I dated while in high school were what the book terms as “projects,” where a guy thinks he can fix a troubled or problem girl.  Meanwhile, I didn’t break through my giving to get habit until my 20s.  I was very talented at fixing cars and could easily change an engine.  I repaired many cars for gals thinking they would date me for saving them thousands of dollars in repairs.  One time I replaced a heater in this one gal’s car only to find out she’d been out with another guy during the weekend I was repairing her car. Later, in my 30s, I had a musical electronics repair business.  I didn’t learn to say no to repairs outside of my expertise for quite a while.  To be helpful, I would accept just about anything. I ended up with many pieces I could not repair and many angry customers as a result.  I finally learned to check my ego, say no, and ask for help when I could not figure out how repair problems on my own.

Why You Need To Read It:

Guys: If you are reading this, it’s because you’ve decided to make the changes necessary to become a Good Guy.  (See the website Glossary for a definition of “Good Guy.”) This book will help you identify any/all Nice Guy behaviors and eliminate them.  It’s required reading for any man who wants to become a better version of himself, the type of man that great women seek.

Gals: You may have some Nice Guy characteristics that need to be eliminated.  You may also be dating or in a relationship with a Nice Guy.  Having him read this book can change him into a better man, provided he wants to change.  Many women mentioned in the book had their relationship dynamic with their man completely change for the better.  You may also have friends who could benefit from the knowledge in the book.  Overall, the world needs fewer Nice Guys.  I’m astounded by the number of dating profiles where the woman says she’s looking for a nice guy.  The last thing you want is a Nice Guy! You want the Good Guy. 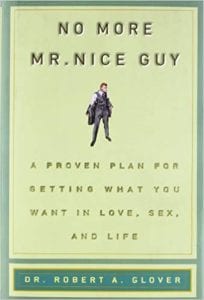